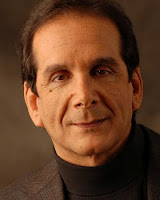 The 2011 PA Leadership Conference, featuring the largest gathering of conservatives in Pennsylvania, has lined up one of the sharpest conservative thinkers in the world for this year's event.

Charles Krauthammer, Pulitzer Prize winning columnist and a Fox News commentator, will be the dinner speaker at the 2011 Pennsylvania Leadership Conference to be held April 8-9 at the Radisson Penn Harris Convention Center in Camp Hill, Pa.

"We are excited to have Dr. Krauthammer as the next in a long series of influential conservative speakers to address the annual Pennsylvania Leadership Conference," said Lowman Henry, President of the Pennsylvania Leadership Council which organizes the event. "In an era when many commentators offer only shop worn analysis, Dr. Krauthammer stands out as a thoughtful voice of reason who injects logic and perspective into the public debate."

The Pennsylvania Leadership Conference is the premiere annual gathering of public policy conservatives from through the commonwealth and beyond. The conference features well known national speakers, and a who's who of state-level government and policy leaders offering commentary and panel presentations.

Dr. Krauthammer was named by the Financial Times as the most influential commentator in America. Since 1985 he has written a syndicated column for the Washington Post, winning the Pulitzer Prize for distinguished commentary in 1987. His column now appears in more than 250 newspapers worldwide.

A contributing editor to the Weekly Standard and to the New Republic, Dr. Krauthammer is a Fox News contributor appearing nightly on Fox's evening news program Special Report with Bret Baier. He is also a weekly panelist on Inside Washington.

Complete information and registration for the 2011 Pennsylvania Leadership Conference can be found at the conference's newly redesigned website, www.paleadershipconference.org