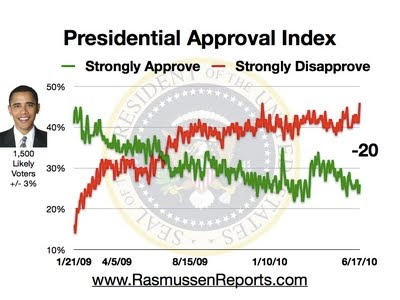 Not much change in the Rasmussen Reports Presidential Tracking Poll: Nearly half of Americans believe Barack Obama is doing a lousy job as president.

The Rasmussen Reports daily Presidential Tracking Poll for Thursday shows that 26% of the nation's voters Strongly Approve of the way that Barack Obama is performing his role as president. Forty-six percent (46%) Strongly Disapprove, giving Obama a Presidential Approval Index rating of -20.

Sixty-nine percent (69%) agree with President Obama that BP should pay for more than just the direct cost of the clean-up. Sixty-seven percent (67%) believe better government inspections of oil rigs might have prevented the spill. Heading into the speech, 30% of voters gave President Obama good or excellent marks for handling the oil spill. These figures will be updated later today.

Seventy-two percent (72%) of GOP voters continue to believe that Republicans in Congress are out of touch with the party's base. By contrast, 61% of Democratic voters think their representatives in Congress have done a good job of representing Democratic values over the past several years.