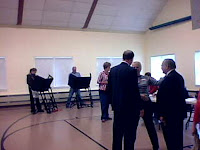 The heated race to replace the late John Murtha continues to draw controversy even on Primary Election Day.

The Republican Party of Pennsylvania even submitted the photo of Critz inside a polling location in the 12th Congressional District.

From a PA GOP press release:

"I guess Mark Critz has picked up some pointers from President Barack Obama, namely Chicago-style politics," Barley said. "Reports have come in from voters who have seen Mark Critz showing up and campaigning inside a number of polling locations all over Cambria County."

"Get out of the polls Mark! Your presence breaks the law, intimidates voters and election workers and could influence the outcome of this election.

"If Mark Critz refuses to follow the law as a candidate, how can we trust him to represent the people of the 12th Congressional District in Pennsylvania? There is no room for these types of Chicago-style politics in southwestern Pennsylvania."

According to the Pennsylvania Election Code, 25 P.S. Section 3060, campaigning inside the polling place is illegal.

(C) No person, when within the polling place, shall electioneer or solicit votes for any political party, political body or candidate, nor shall any written or printed matter be posted up within the said room, except as required by this act.