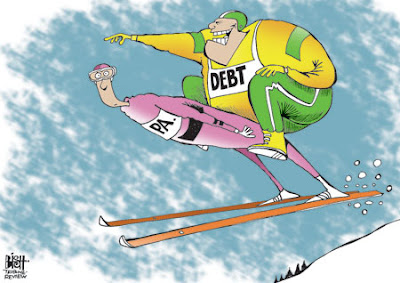 Pennsylvania's mounting debt ranks the state 35th in the nation and earned it a dubious two-star rating from Forbes.com (one star being the worst on a scale of four stars). Even at that, the Keystone State's sad rating doesn't tell the full story.

The Forbes report estimates state debt at $950 per capita. For the sake of comparison, that puts the commonwealth in the company of West Virginia and Maine. East Coast states faring worse include New York, New Jersey, Connecticut and Massachusetts.

But there's more, as the Commonwealth Foundation reveals. Factor in debt by local governments and state agencies and the tab per Pennsylvanian comes to almost $10,000.

Then there's the state's pension pinch -- which is more like a poke in the eye.

That time bomb is ticking down to a 2012-13 explosion for taxpayers. As a result of a boneheaded pension increase for state and school district employees in 2001, miserably misguided policies and deferred increases in payments after market losses, the pension bite is projected to increase by $1,360 per household, according to a Commonwealth analysis.

Pennsylvania's on the wrong course. More reckless spending, debt and unfunded pension liabilities shouldn't drop the state to a one-star rating before Pennsylvania's leaders pull their heads from the sand and change direction.