Rep. David Levdansky must be defeated 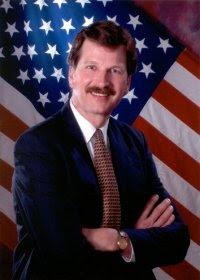 Who is David Levdansky and why is he working so hard to prevent property tax relief for Pennsylvania homeowners?

Voters in the 39th House District (parts of Allegheny County and Washington counties) should oust Rep. Levdansky in 2008. Nobody in the House this side of Democratic Majority Leader Bill DeWeese has worked as hard to prevent the elimination of school property taxes than Levdansky.

The 22-year career politician rose from obscurity to become chairman of the powerful House Finance Committee in 2007 after Democrats won a 1-seat majority in the state House.

Levdansky has spend most of 2007 preventing serious consideration of House Bill 1275, the School Property Tax Elimination Act of 2007. He even came up with his own "tax relief" bill, something known as House Bill 1600, which would temporarily lower property taxes while permanently raising the state sales and/or income taxes.

I watched Levdansky and Rep. Sam Rohrer, R-Berks, debate House Bill 1275 on PCN Monday and I'm amazed that someone as educated as Levdansky (he has three degrees, according to his Web site) could come across as so dense.

Is Levdansky pretending to be a blockhead or is the money special interests groups are dangling in front of him to prevent the elimination of school property taxes clouded his judgment?

If you live in the Clairton City, Elizabeth-Forward, Ringgold, South Park or West Jefferson Hills school districts, a major reason your school taxes are so high is because people like Levdansky are blocking the best chance in decades to eliminate property taxes.

I said in an earlier post that the ouster of DeWeese is priority No. 1 to clear the bottleneck in the do-nothing state Legislature. The ouster of Rep. Levdansky would also go a long way to removing roadblocks to the elimination of property taxes for all Pennsylvania homeowners.

The primary election is April 22. The general election is Nov. 4. A vote against Levdansky is a vote for the elimination of school property taxes in Pennsylvania.

Monica Douglas Republican from Elizabeth Borough will be running against David Levdansky this Tuesday as a write in candidate.Ms.Douglas is being endorsed by the NRA and F.O.A.C.She is a community leader and is very involved in state and local governments.If you are tired of the same old politics vote in Monica Douglas this Tuesday.Tell your friends and neighbors,she will need 350 write in votes to make it on the November ballot.

I know Monica and she has always been for the people!We have to have 350 Republican votes to have her on the ballot in November.Dave Levdansky should not go unopposed,please call your neighbors,friends and family to vote for Monica.