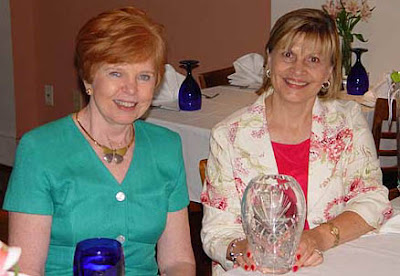 The Daily Local News in West Chester is reporting that a longtime friend of Rep. Carole A. Rubley is considering running for the 157th House District seat being vacated by Rubley in 2008.

Judy DiFilippo, chairwoman of the Tredyffrin Township Board of Supervisors, told the newspaper Thursday she is considering a run for the state Legislature.

DiFilippo told reporter Dan Kristie she will probably be ready to announce her intentions within "a week to 10 days."

Rubley, who has represented the 157th District for 15 years, announced Wednesday she will not seek reelection in 2008.

Rubley and DiFilippo, both Republicans, are longtime friends, according to the newspaper. They served together on Tredyffrin's Board of Supervisors, and DiFilippo worked for 2½ years as a legislative assistant for Rubley, the paper reported. That's Rubley on the left and DiFilippo on the right at a retirement luncheon hosted by Rubley for DiFilippo after she stopped working in Rubley's district office.

Rubley all but anointed DiFilippo as her successor on Thursday.

"I think Judy is fabulous," Rubley told Kristie. "She'll be a strong advocate for good land-use planning, and she'll help protect the rights of local government."

DiFilippo has served as a Tredyffrin supervisor for 18 years and is the chairwoman of Chester County's planning commission. She also co-chairs the Landscapes II Committee, which is revamping Landscapes, the county's master plan for land use and preservation.

The 157th District includes the townships of Schuylkill and Tredyffrin and the borough of Phoenixville in Chester County and parts of Lower Providence and West Norriton townships in Montgomery County.

While Democrats are salivating at the chance of two open House seats in GOP-dominated Chester County (Rep. Art Hershey is also retiring), the edge for both vacant seats has to go to Republican candidates.

The inability of Democrats to win any countywide offices on Nov. 6 shows that they're still not strong enough to tip the GOP domination in Chester County.

And don't make any long-term plans if you're freshman state Rep. Barbara McIlvaine Smith, who won the 156th District seat by 34 votes in 2006. A strong Republican candidate could easily take back the seat (and possibly return control of the House to Republicans after the 2008 election cycle.)

So keep an eye on Chester County.